Tyrol: Amendment to the regulation on the sectoral HGV driving ban

Due to extensive construction work on the rail infrastructure and at the Brennersee terminal, ROLA rail services between Wörgl and Brennersee will be suspended in both directions from the evening of 19.08 to the evening of 29.08.

The following measures are being taken to mitigate the effects of these restrictions:
1) the number of ROLA services will be increased from one a day per direction to 5 a day per direction between 19.08 and 29.08:
From Wörgl -> Trento trains leave at 02:00, 04:15, 11:00, 15:00 and 17:15
From Trento -> Wörgl trains leave at 02:30, 08:00, 10:50, 18:25 and 20:20
In this way, the transport capacity at this destination will be increased to 210 slots/day. More information can be found at https://rola.railcargo.com/de/.
2) In addition, the federal state of Tyrol will amend the regulation on the sectoral HGV driving ban for the duration of the construction work (19-29 Aug) as follows:
With the unavailability of the Brenner terminal, it will be more difficult to reach certain destinations between the Brenner and the Trento terminal via the ROLA.
For this reason, the core zone (Kernzone) where the sectoral ban applies will be expanded to ensure that the temporary closure of the Brenner terminal does not give rise to diversion traffic in the south and in the north aimed at avoiding the sectoral driving ban.
Journeys whose destination OR point of origin is located in the following provinces or regions (consitituting the extended core zone) are exempt from the sectoral driving ban in the above-mentioned period:
a) Austria: the political districts of Imst, Innsbruck-Land, Innsbruck-Stadt, Kufstein, Lienz and Schwaz,
b) Italy: all district communities of the Autonomous Province of Bolzano and in the Autonomous Province of Trento, the valley communities Comun General de Fascia, Comunità Territoriale della Val di Fiemme, Comunità di Primiero and Comunità Valsugana e Tesino. 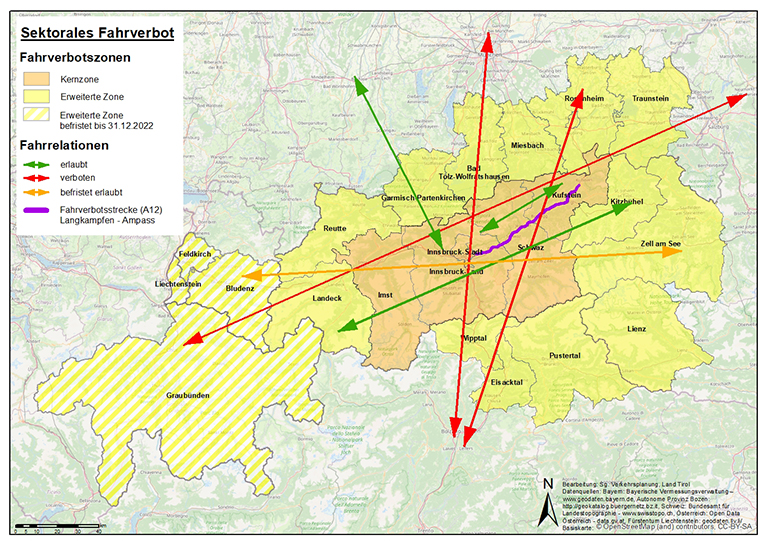 Drivers are reminded that the other regulations on the A12 Inntal Autobahn remain unchanged.

The Tyrolean state government has planned 24 days on which cross-border HGV traffice will be restricted. This is 3 more than in the same period last year.On...

The proposed strike action is scheduled to start on 1 February and last until 7:00 AM on 2 Februrary.It will impact international arrivals at all UK air and...

From January 20, lorries with a GVW over 3.5 tonnes are forbidden from overtaking other vehicles on the E4 and E4/E20 motorways between Södertälje and...